A People For His Name is a missional disciple making community. Together we are on mission with Lord of the Harvest to multiply disciples and missional communities. We are currently engaging unreached people groups in Kenya, Pakistan and the United States. To learn more about where and how we are engaging.

Christian Missions is the engagement of unreached people and people groups with the Gospel of Jesus Christ. In direct response to the last commandment of Jesus to go and make disciples of all nations, engagement takes place in local cross-cultural or foreign overseas settings. Missionary disciple-makers engage the lost by preaching and demonstrating the good news of the Kingdom of God and teaching them to obey all that Jesus commanded.

Why Is Missions Important

The importance of missions is to fulfill the desire of God's heart in reaching those that are lost and far from Him and to bring glory to His Name. He desires the redemption of the Nations from the kingdom of darkness through faith in His Son, Jesus Christ. His desire is for true worshipers, who worship Him in spirit and obedience to His Truth.

God's Heart For The Nations

The well-known verse John 3:16 is the heart of God towards the Nations. For God so loved the world that He gave His only begotten Son, so that everyone who believes in Him would not be lost but have eternal life.

The next verse continues, God sent His Son not to condemn, but that the world might be saved through Him. The word "sent" is missions.

God now also sends us in His love with the good news of His Kingdom, so those who have not heard or believed in His Son, now have the opportunity to repent and believe.

After God's attempt to correct the Nations with flood and start again, they rejected Him again at Babel. God had blessed Noah and his sons and commanded man again, "be fruitful, multiply and fill the earth."

After some time, the people again said no to God and rejected His command. In disobedience they gathered themselves into one place and said, "let us build a tower that reaches into the heavens and make a name for ourselves, as not to be scattered across the earth."

At this point in Genesis Chapter 11, God now scatters the people, and in their disobedience, they go on to serve other gods.

God now changes His tact in His plan to redeem His creation and looks to Abraham to raise a new people for Himself. A new nation to who says yes to Him.

He now looks to bless Abraham and make his descendants great. In hope that through their jealousy of Israel's blessing, the nations would repent and turn back to Him.

Genesis chapter 12 starts with God calling Abraham to leave his country and relatives to go to a foreign place. For God planned to start again and to make a great nation from him to gain a people for Himself.

As Abraham said yes to God, now it is our turn to leave and go. God now wants to make a great nation from us as He did with Abraham. 'For you are a holy nation, a people to be His very own.' 1 Peter 2:9.

God is now asking us to join Him in visiting the nations. To call them to repentance and to faith in His Son, that again in the hope they would join Him in His Kingdom.

The Kingdom and Missions

With your blood, you purchased a people for God from every tribe, tongue, and nation. You made them a kingdom and priests for God, and they will reign on the earth.

Missions are the gathering out of every nation into His Kingdom. We are called to assist in assembling this kingdom of priests and kings. And this kingdom will not be complete until there's a delegation from every tribe of the earth included.

And this Good News about the Kingdom will be preached throughout the whole world as a witness to all the nations, and then the end will come.      Bible Hub Matt 24:14

This Good News must reach every tribe, tongue, and nation, to see the fulfillment of our Creator's heart. His desire to have representation out of every tribe must be completed to see the end of the Great Commission and the second coming of The Lord Jesus Christ.

The Church was not designed for Sunday worship services alone. The command given to her is the Father's heart. Her primary focus must be calling the Nations back to God and gaining a representation out of every tribe to complete herself.

"I want you to understand this mystery.... but this will last only until the full number of Gentiles has come in". Romans 11:25

Back to Table of Contents

The focus of the Church must be unreached people groups among the nations. The Church was birthed into the apostolic vision imparted by Jesus to His apostles, and we must return to our roots to complete the mission. 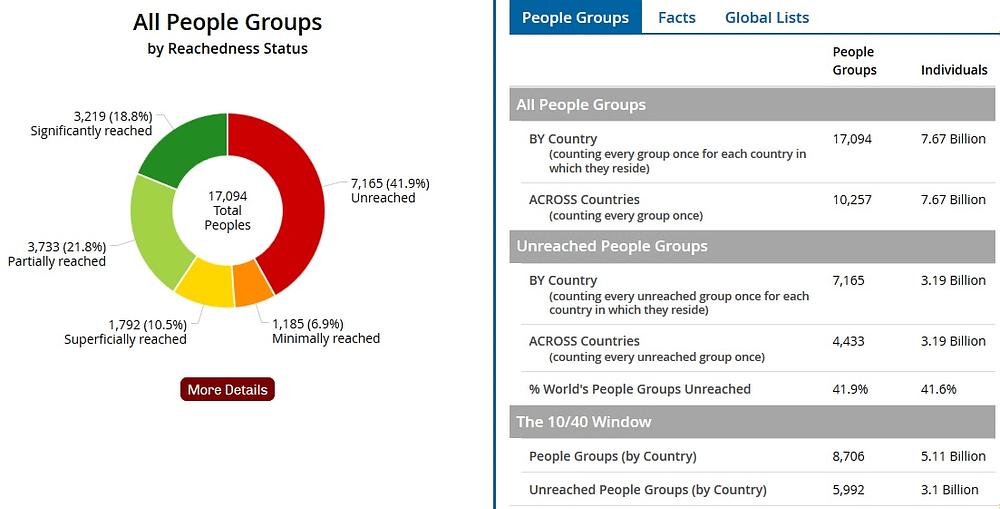